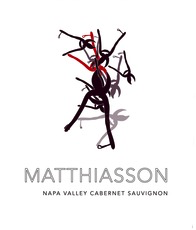 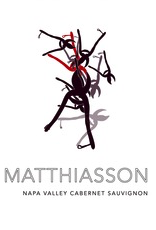 VINEYARD: Fruit was sourced from six vineyards throughout the Napa Valley. The three AVAs are Coombsville for structure and black fruit, Rutherford for savory Cabernet character and bright fruit, and Oak Knoll for soft fruit. The DEAD FRED Vineyard in Coombsville sits on rocky volcanic soil. It’s south-western exposure causes it to pick up heat during the day, and the proximity to the mouth of the Napa Valley keeps the nights cool. Leased in 2012. The YORK Vineyard is in the heart of Rutherford, on the classic gravelly alluvium known to create the famous “Rutherford Dust” character. Leased in 2013. The HELEN'S GATE Vineyard is the home of Arthur Berliner and Marian Lever. It sits on an east-facing hill along Whitehall Lane in the Rutherford District of Napa Valley. Matthiasson planted the vines in 2009. The RED HEN Vineyard is on rocky alluvium next to Dry Creek, in the Oak Knoll District. Cool breezes and dry rocky soil combine to create structure and ripe fruits. Matthiasson trades fruit for viticultural services. The BENGIER Vineyard (formerly Vare) is also on Dry Creek, in the Oak Knoll District, but on gravelly soils in the mouth of the canyon. The cool air drainage and short fall days as the sun is blocked by the redwoods result in light aromatic wine. Matthiasson has overseen the farming of the vineyard since 2002. The MATTHIASSON Vineyard is on loamy alluvial soil on the west side of the Oak Knoll District, just south of the Red Hen Vineyard. It is the coolest of the vineyards, receiving morning fog and afternoon sea breezes most summer days. This is the home vineyard.

VINIFICATION: The fruit was fermented at low temperatures and pumped over twice per day; Matthiasson doesn’t strive for a high rate of extraction, instead choosing to preserve freshness and high-toned aromatics. Since the fermentation temperatures were cool, the fermentation was long and slow, lasting for three weeks. The wine was pressed at dryness, blended immediately, and aged for 20 months in a combination of mostly used and a few new barrels (less 20% new French oak).
1,995 cases produced

TASTING NOTES: 2017 was mostly a mild year, with just one heat spell close to harvest. Flavors recovered nicely after the heat broke, and surprisingly the sugars stayed low, allowing fruit to be picked at low sugars and beautiful natural acidity. Luckily, harvest was finished by the time the fires hit, and the winemaking team were able press the last tanks and wrap up the vintage while the helicopters flew overhead dropping water on the nearby flames. The vintage gave an elegant Cabernet, a bit more fine-boned than usual, but not at all shy, instead full of joyful flavor...a wonderful exploration into a style of Cabernet even more reminiscent of the early days of Napa than is typical even for Matthiasson. The nose shows abundant red fruits, lots of bright cherry along with bramble-berries, such as blackberry, cranberry, mulberry, and framed with hints of mineral/herbal characters such as graphite, cedar, and pencil shavings. The palate is vibrant and fresh, with light tannin and beautiful acidity. Decanting is highly recommended.